Last spring when we had the boat out of the water we decided that it would be worthwhile to buff and polish the hull. It was probably the first time that it had been done in 20 or so years.

We were not expecting much cosmetic change but we needed to arrest the typical UV damage to the chalky old hull, especially as she had spent a year or two in the Bahamas before she came to us.

So with a cheap Black and Decker Buffer in one hand and some very expensive 3M Polishing Compound in the other I went at the Hull, finishing with a coat of Fiberglass Polish and then some Fleetwax.

As mentioned before the intention was really just to clean her up a little, but frankly the results were astounding! 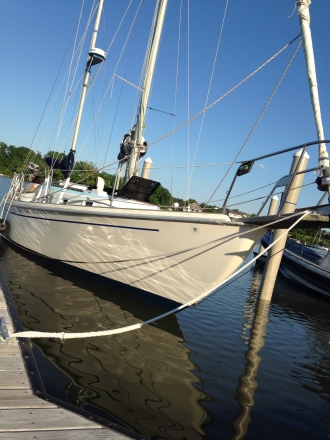 So last weekend I decided to start on the topsides.

These are generally in poor shape due to more exposure to the sun, kids ,dirt etc. The cockpit was the grimiest not just because it is the most used area on the boat, but also the exhaust leak/failure that I had two years ago gave everything a good coat of black dust.

I started with a good seawater scrub, then broke out the buffer and polishing compound, then water, then 409, then more water, then polish, and then fleet wax.

It looks way better than before! but truthfully I am frustrated that I cannot get the same shine that I got on the hull., I understand  that the deck does get hit with a lot more UV and wear, but I fear that it simply may never have that sheen again without paint. Painting is not an option, in my mind, unless the deck needs substantial core replacement or really dinged up.

For a good series on repairing and painting the topside visit Project Atticus. These guys did a fantastic job on a much older Seawind 1

Its a long process for a small area of deck, but I was starting with one of the worse areas as far as dirt, wear, and accessibility goes. I want to get the Firberglass as clean as possible, as I don’t plan on doing this every year, and our hope is that with a good clean base she will not absorb as much dirt and we can arrest some of the degradation.

When all is said and done she turns forty this year and none of us will ever look as good after forty for basically the same reasons.

Back to it next Sunday for deck leaks and more cleaning/restoration, I also have some mast work to get done…