After a night of celebrating our success, the realization that we had to put all this back together set in. So after copious quantities of Advil we set to it.

The first job was to glass and epoxy the base of the post into the slot and to the keel to prevent any future moisture issues.

This was tricky as I only had partial access to the forward side but we got it done. Then we addressed the rot/de-lamination in the end grain of the plywood cabin sole. This was pretty dry at this point due to the cabin heater that we left in the bilge overnight. I drilled 3/8″ horizontally into the end grain of the floor where it was wettest the night before and used “Git Rot” a product that I had used extensively in the UK on the boatyard that my family owned. This epoxy works by capillary action to follow any moisture into the wood and sets up the whole damaged piece of wood as hard as rock. I would not recommend it in structural areas but it works wonders on soft decks. then I filled the rest of the end grain with slightly thickened epoxy and calmed it all together for a couple of hours. 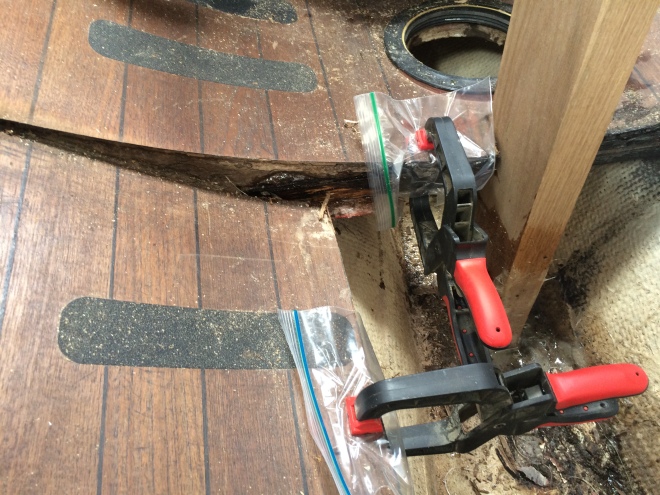 Some of the wood could not be saved however and was cut out and discarded. There are no miracle products when it comes to rot and boats. 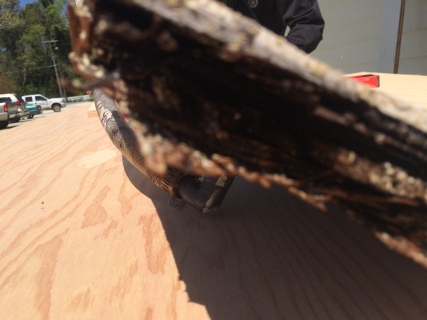 Next we had to brace the base of the post and provide stringers to support the new cabin sole. I used some 3/4 inch marine ply and a jigsaw to cut and shape the two stringers. 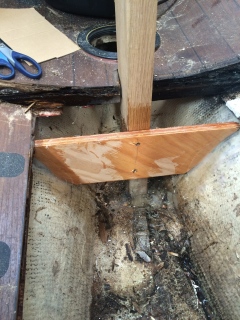 These were filleted with thickened epoxy and taped over on both sides with glass.

Following this we were able to start working on the floor. We made the measurements “loose” and cut away at the 3/4″ ply, it took a couple of attempts to get it to fit but we made it work. I wasn’t looking for perfection in this as I was laying glass and epoxy in the shower and I had carefully removed the 1/4″ teak veneer that would be laid over the base. 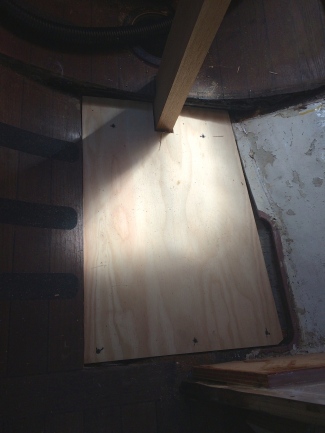 Once the floor was back in it was a relatively quick job to replace all of the cabinetry. We had taken the time earlier to use all of the old wet pieces that we had removed as templates. we skewed and epoxied everything together. This only took an hour or so. 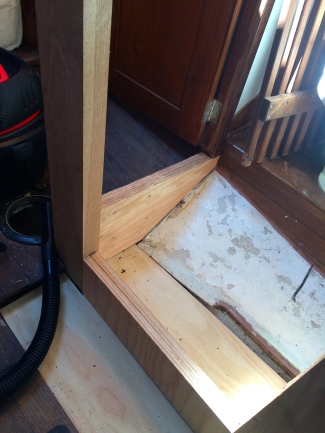 The last nasty job of the weekend was to fill, fillet, and glass. I have not used this much epoxy since I was in my early twenties and I forgot how the fumes can get to you. After an hour of being hunched over, laying in two coats of glass I was frankly, high as a kite. Next time I will wear a mask.

Next I have to fix the teak cabin sole and take her out for a sail to make sure that the post will support the mast without flexing. It should work well as it is the same wood White Oak, and same dimensions as the previous post which had been there 40+ years.

2 thoughts on “Day Two of the Santosha Destruction/Construction Weekend”

Sailing, yachts, adventure and sailing around the world!